Baby Sleep: How Many Naps Does Baby Need in the First Year?

Babies sleep. A lot. Especially newborns, who typically spend 14–17 hours a day sleeping (and sometimes up to 19 hours!). You might know this already, whether it's because you've had newborns before or your newborn has just arrived. What you might not know, though, is how many naps your baby needs in their first year. This is a totally understandable question to have, and you aren't wrong for wondering it.

Babies and naps go hand in hand, but there are still many unknowns that might leave you feeling uncertain of whether or not you're "doing it right." Why do they nap so much? How long should they be napping for? How can you stick to a consistent nap schedule? All of these questions (and any others you might still have) are perfectly normal, and thankfully, they all come with answers. Let's talk about it. 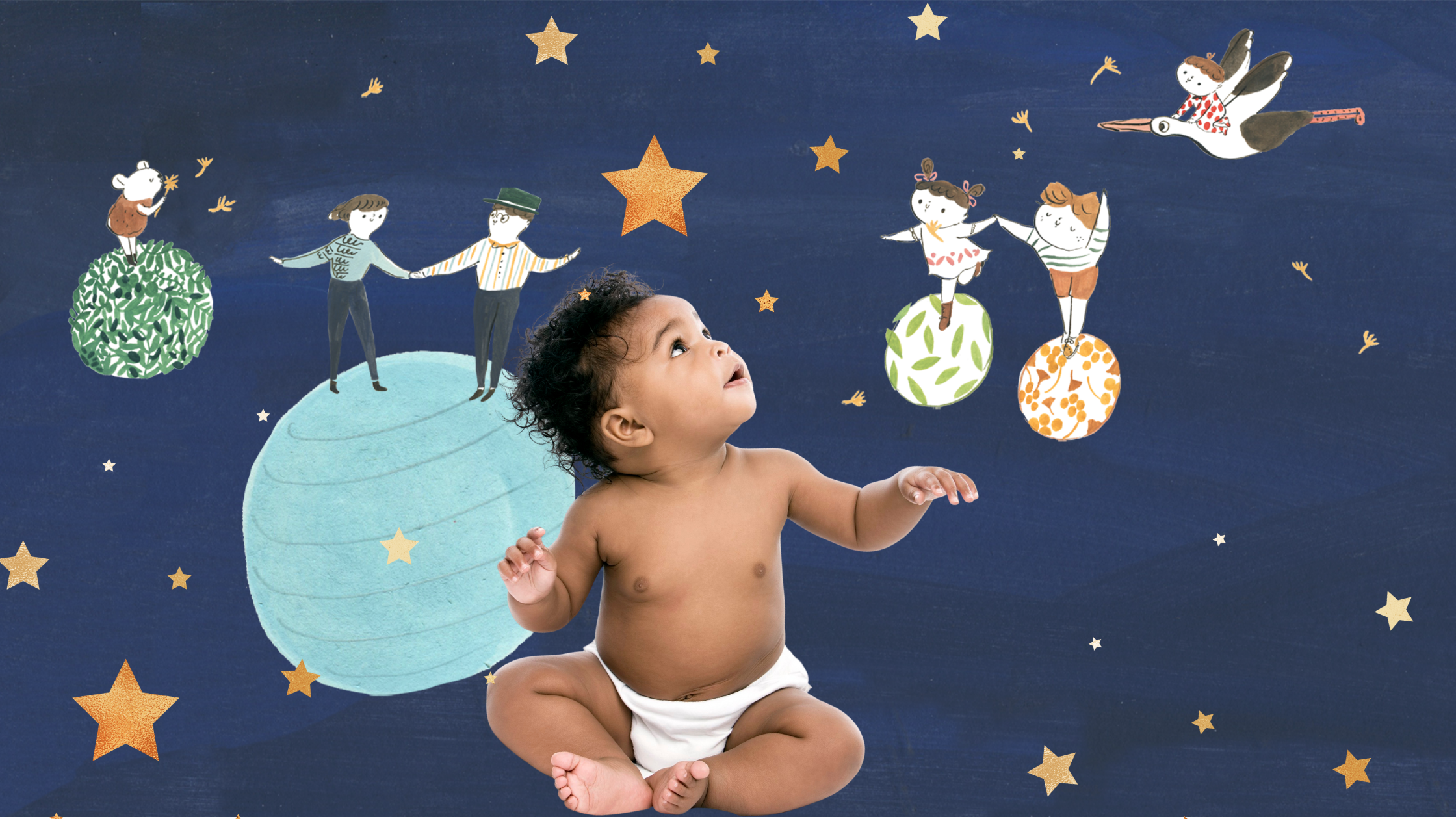 Why Naps Are Important for Babies

You likely already know that skipping nap time is a surefire recipe for total disaster. Okay, so maybe "total disaster" is a little dramatic, but you know that no nap for baby equals meltdowns, irritability, and poor sleep habits for all involved. Why is this? As it turns out, it all comes down to the baby's natural rhythms and their simple lack of ability to stay up for as long as a fully grown person.

It all boils down to two natural sleep regulation processes: the circadian process and the homeostatic process. The former regulates the body's comprehension of light and dark, while the latter regulates the body's comprehension of how long you've been awake. For newborns, these processes are still being hashed out, and naturally, they cycle through more quickly. As such, naps are necessary and naps are frequent.

How To Create Baby's Nap Schedule

You now understand why your baby's nap schedule matters, but you still might be left wondering how exactly you're supposed to create a schedule for your baby's naps. Fear not: It's all about doing what's best and most natural for your newborn. It starts with observation. Simply watch your baby for a week and see what rhythms their body naturally falls into. If they tend to fall asleep at a certain time of day, let them. If not, you can create a schedule for them.

This can be done by observing the natural signals your baby sends when they begin to feel tired — signals such as yawning, fussiness, rubbing their eyes, and so on. Keeping the baby active throughout the day when they aren't napping can help make these signs even more obvious. And, of course, when it comes time to put the baby down for a nap, always use their crib.

Common Nap Schedules for Each Stage of the First Year 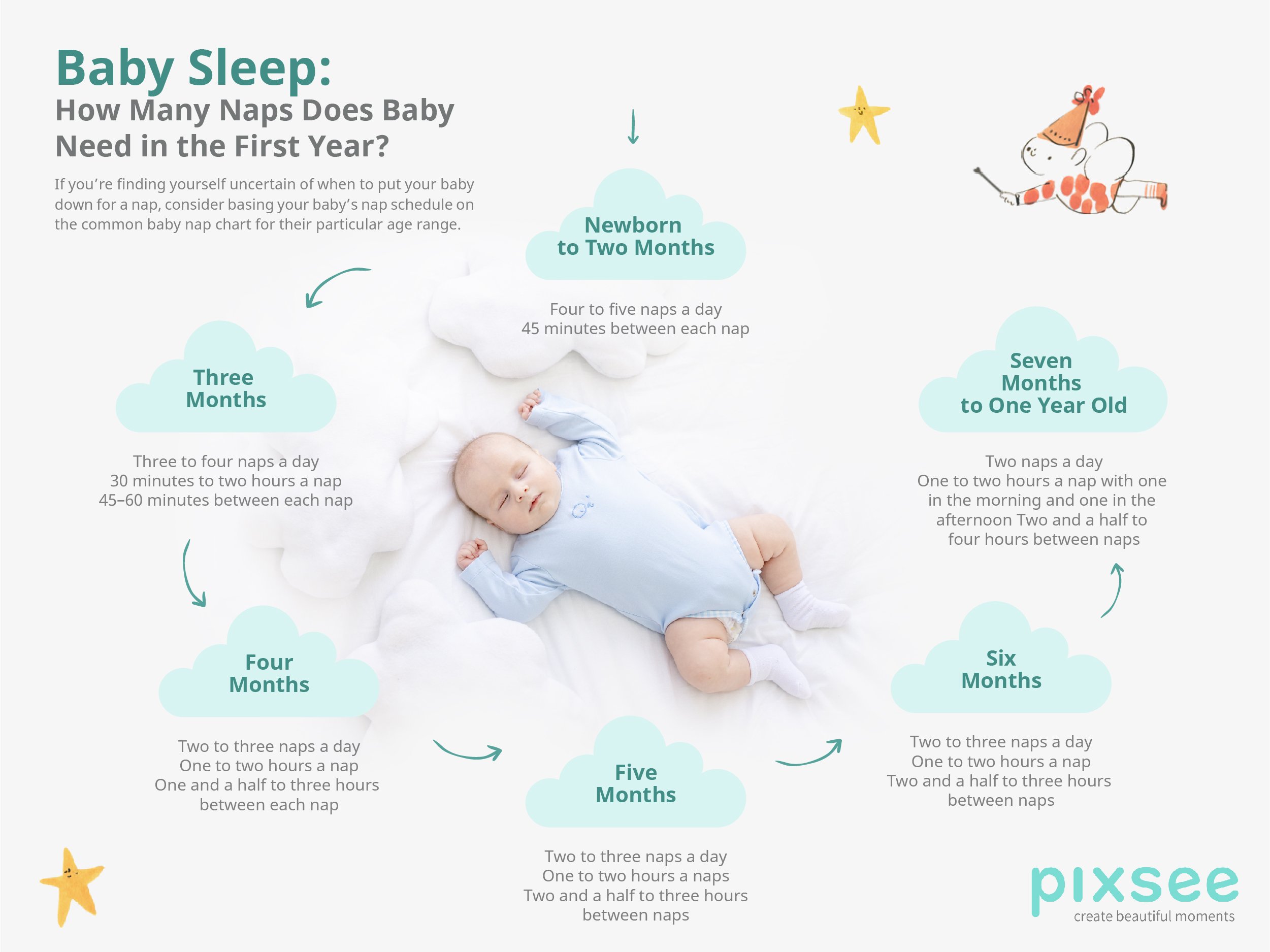 If you're finding yourself uncertain of when to put your baby down for a nap, consider basing your baby's nap schedule on the common baby nap chart for their particular age range.

Seven Months to One Year Old

One of the most common ways to stick to a healthy nap routine for your baby is by abiding by the 2-3-4 rule. This is a common routine many new parents tend to follow, and it typically works remarkably well. It's all about increasing the time between naps throughout the day. First, two hours of time spent awake preceding the first nap, then three hours spent awake following the first and preceding the second nap, and then four hours of time spent awake before it's time to go to bed for the night.

Beyond this, here are some other tips that can help you create your baby's nap schedule.

The Bottom Line: Baby’s Nap Schedule for the First Year

Naps are so important — both for your baby's healthy sleeping schedule and your own. Following the helpful tips and tricks above and utilizing the pixsee Smart Baby Monitor can help make nap time easier and less stressful than ever before.

Click here to learn more about how the pixsee Smart Baby Monitor can help you tackle nap time with ease.

Panel only seen by widget owner
Edit widget
Views
9%
Extend Limit
Share
🔥
Tell your customers about
new website functionality!
Kristen Buckhout
December 21
Great quality
Super easy to set up! (Didn’t even read directions either). Camera clarity was the best I’ve seen. A great upgrade from our previous camera. It would also make a perfect baby shower gift!
Read more
Posted on
Stella Peachy
December 13
Amazing smart baby camera
We are SO impressed with the Pixsee smart baby monitor! The live stream is so clear and it has so many great features. I really like that it has the face covering detection as well to help support safe sleep. I highly recommend checking this out if you’re looking for a smart baby monitor!!
Read more
Posted on
Megan Winokur
December 7
Amazing Picture Quality
I was searching for a monitor that was cute and also had all the functions I needed, this is it! The picture quality is amazing, I can't believe how clear it is day or night. I found it really easy to set up, and the cry detection is such a nice feature. As a work from home mom I am able to make the most of nap time using the pixsee monitor. It's also easy to take with me if we travel and connects easily to wifi. Life saver! I highly recommend.
Read more
Posted on
Sandra
December 5
Highly recommend!
I love the look of this camera! I also love having peace of mind when my babies are asleep. It easy to use and check right from your phone. Definitely recommend.
Read more
Posted on
Tosha
December 5
Great Baby Monitor!
We are loving the pixsee baby monitor. I’ve has many over the years, and this one is a favorite! I am using it in my boys’ room who are 16mo apart. It is a wide lens, which allows their entire room to be kept in frame.Pros:1. Sounds and music that you can play through the pixsee.2. The design of the foundation, making for a seamless look anywhere in the room.3. Ability to talk to your baby/child through the speaker.4. Ability to take pictures of what is going on in the room.5. The overall appearance of the monitor is adorable and gender neutral.6. How easy your can move and adjust the position of the camera.7. The app that you use along with the pixsee monitor.The only “con” I would say is that the night vision can blur some objects that are further away in the frame. But it’s not bad at all.I am happy with the quality of the monitor and it exceeded my expectations. Highly recommend!
Read more
Posted on
Amazon Customer
December 2
Great video quality
Easy to install, great video quality
Posted on 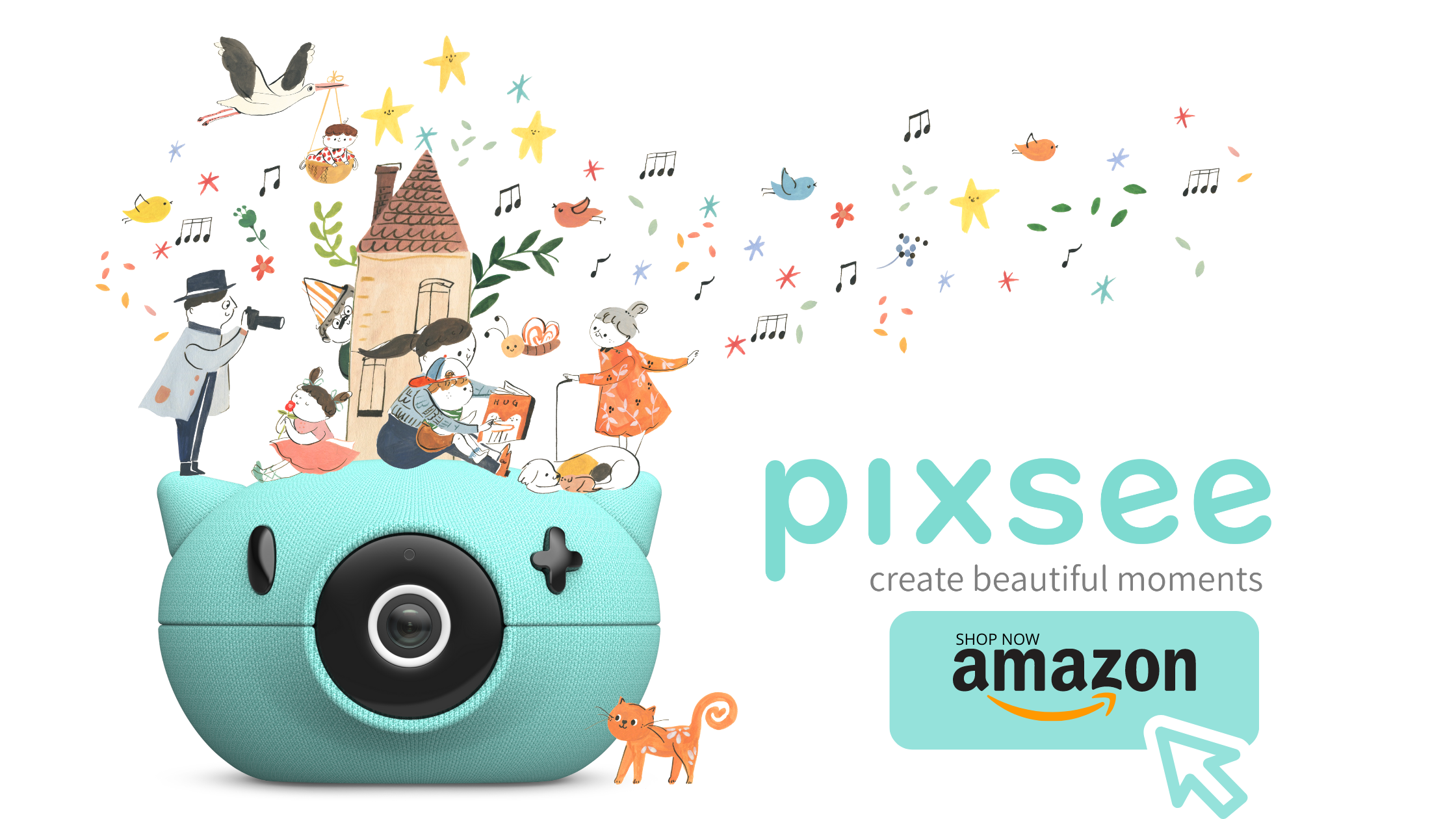 Baby Must-Haves: How to Choose a Smart Baby Monitor

Baby Sleep: How Many Naps Does Baby Need in the First Year?

Baby Sleep: What to Expect at Three Months

How to Announce Pregnancy to Your Husband

When to Move Baby to Own Room: Is It the Third Month?

10 Surefire Ways For How to Make a Baby Stop Crying